Guys, Aruba was a much-needed breath of fresh air. This was my first view of the ocean and I was utterly enchanted.

Our hosts, Deno and Helen, very generously picked us up at the airport when we arrived on Saturday and delivered us to their timeshare at Marriott’s Aruba Surf Club. The drive to the resort was such a visually interesting experience. Aruba used to be a Dutch colony, and there was a great contrast of gingerbread-y architecture and open air island markets. 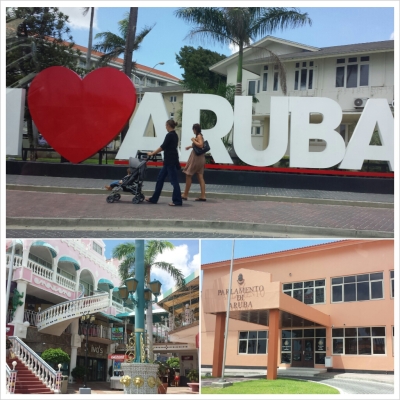 If I had to change anything, I would only have asked for more time, but we made the most of what we had. Bags were dropped off, swimsuits and cover-ups were donned, and we made our way down to Hadicurari, a restaurant on Palm Beach. I ordered a grouper sandwich off the lunch menu, and could not believe how delicious it tasted. At first I thought they added special ingredients, but then I realized it was just slathered in mayo. I always hold the mayo these days and I had forgotten how creamy and tasty that stuff is! We settled back to soak in the island life and the local beer, Balashi. 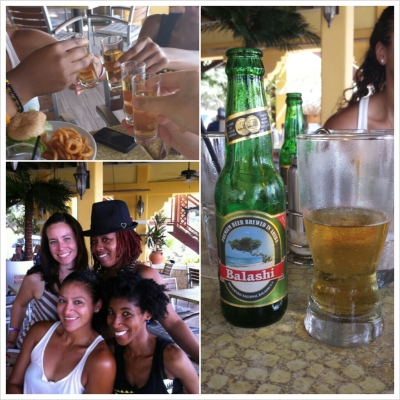 That first night, I had a near-gout experience. Deno treated us to an unforgettable meal at Texas de Brazil. It was my first time at a Brazilian Steakhouse, and I wasn’t ready. Let me repeat, I was not ready.

We had a bit of a wait time before we were seated, and when we were shown to our table, I was ready to get down with some food. The meat was succulent and juicy (especially the chicken sausage), and before I knew it I had consumed at least 48 lbs of it. True story. And then I decided to top it off with creme brulee because why not. We had planned on going out that night but by the time we made it back to our suite, meat coma had struck us all. It was a rough, uncomfortable night.

Despite having gained 10 lbs overnight, I fearlessly threw on a two piece the next day for some fun catamaran action. This was the only excursion we did while in Aruba, and it was easily the highlight of the trip. Our first snorkeling stop was over a shipwreck which totally made me feel like a treasure hunter. The water was pretty deep so I couldn’t see a lot of the WWII ship, but it was still pretty awesome. These black and white fish were the friendliest and if you held your fingers out like you had food, a school of them would come up and swarm around in front of you. Some people on our boat saw a sea turtle! 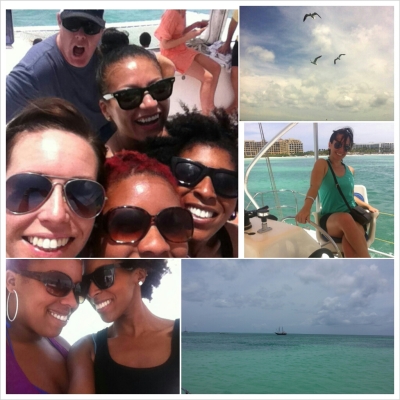 The thing I ended up loving the most about the excursion was the rope swing on the boat!! I’ve never in my life used one of those things, and for my first swing over the water I screamed bloody murder (I almost drowned out the laughter from the boat). The second swing was rough too, our fearless captain was attempting to give me a good push for more speed, and instead I slipped off the boat before I was ready. By the third go round I was a freaking pro!

When we made our way back to the beach and the resort area, we headed over to MooMba Beach Bar & Restaurant for a few libations. I loved the vibe of this place. It’s an open-air palapa right on the beach, and a perfect stop after a dip in the ocean. The bartenders were friendly, prices decent and hamburgers were surprisingly large and tasty (again with that mayo!). MooMba is the place to be on Sunday nights, for visitors and islanders, and when we made our way back there later that night, it was packed. 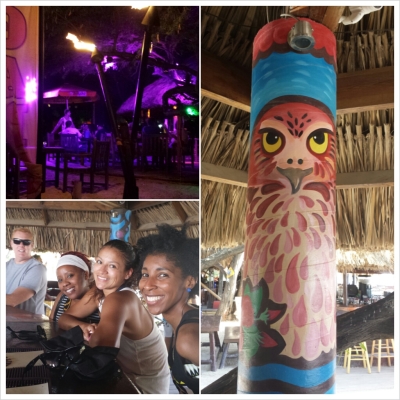 I had been hoping to make the 6ish mile round trip run to the California Lighthouse, but I just couldn’t work up the motivation in the face of all that humidity. I wasn’t going to go my whole trip without doing something active (besides posing for pictures), and Monday morning happened to be Zumba morning at the Marriott. The class was a sweaty good time.

The rest of the day was all about take it easy mode. We did a lap at the swim up bar, lounged, chilled with some of the fellow resorters…

…and did some souvenir shopping.

I didn’t spend all of my money on souvenirs; I saved a little to play with later that night at Stellaris casino. My roulette skills had been hyped up all day, so of course I lost twenty bucks in two minutes. I didn’t lose it at roulette though, I lost it by sitting down at a machine that I thought was penny slots but was really dollar slots. D’oh. Does that only happen to me? 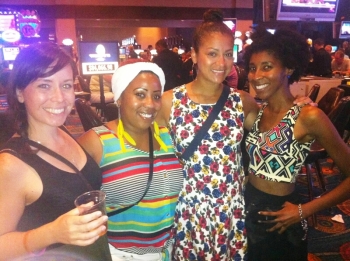 Waking up Tuesday was a cold dose of reality. Ashley and James headed out early to catch their flight, but Yvette, Corneka and I had almost a full day to say goodbye to beautiful Aruba. We made our way to a restaurant we hadn’t tried yet, Nos Clubhuis, and it was easily my favorite meal of the trip. We ate lionfish, bony but delicious! We also tried pastechi (like hot pockets only twenty times better) and funchi. 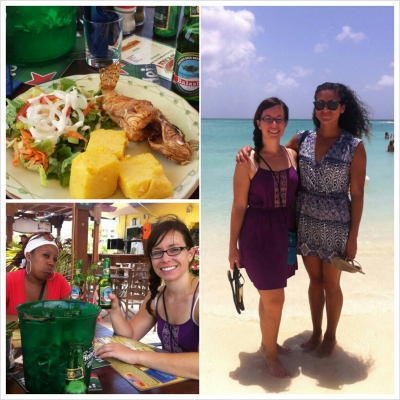 And then it was time to wish Aruba a fond farewell.

For another take on Aruba, check out Ashley’s travel log here.